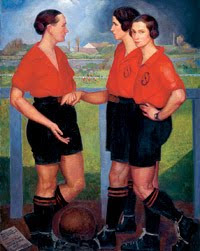 
A friend recommended this painting to me - amazing, given the year it was painted and the commonly held view that women's football is a recent phenomenon spearheaded by post Title IX generations of American women. By chance, I happen to be just finishing Barbara Jacobs's incredible portrait of perhaps the most successful and famous side in English women's football, The Dick, Kerr's Ladies (see also this recent Guardian story). Jacobs charts the development of this team during and after World War I - Lancashire women working in factories (while men were on the front) formed recreational teams, and then played charity matches to raise funds for returning soldiers. These matches drew impressive crowds by any standard - 10,000, 15,000, 35,000, 53,000, 65,000. People with almost nothing to spend on themselves paid for tickets - and all the money raised (beyond expenses for the players) was turned over to local charities. (Interesting detail: the women's games from these years produced what is arguably the first night match in a Boxing Day derby.)

As these women became national - and even international celebrities - and as women's football developed rapidly into a form of popular entertainment - the establishment decided that it was too dangerous. It was deemed inappropriate for women by the FA in 1921. Jacobs points out that this ban was likely issued as much for reasons of class as gender - these teams forward images of working class women doing something other than laboring as servants and in factories, and breeding more workers to do the same. It also foregrounded the very different gender dynamics within the laboring communities of the northwest of England. Matches raised huge sums to support returning soldiers - wounded, traumatized, and re-entering a very changed labor market (changed, in no small part, by the war itself and by the women's work in the factories). Men in the northwest actively supported the women's game - the success of the women's game, in other words, not only challenged ideas about femininity, it challenged the social organization of relationships between men and women (thus not only were women banned from FA grounds, men were banned from refereeing women's matches).

Jacobs also points out that the FA must have been getting nervous - all of the profits raised by these matches went back to the communities which hosted them. In fact, were it not for the women, the FA could not have taken any credit for charity works during these years. But as thousands of people spent their hard earned dollars to see the women play, and to support their neighbors - it was inevitable that they would begin to ask: "Where does all the money raised by the men's games go?" Indeed!

I am inclined to think that this - the anti-capitalist, labor-oriented ethos of women's football and its fans - must have been the bigger challenge to the (fragile, shifting) social structures of the day. (Jacobs is very good at breaking down the complex class dynamics of sport and leisure in the UK.) The success of the league, and the FA's hysterical reaction proves a point made by a range of radical feminist thinkers - a truly feminist environment seeks to destroy mythologies of gender difference. In doing so, it tackles the very architecture of capitalism. And that's the bit that really freaks people out.

[I am researching the story behind this painting - there is a probably link between it & The Dick, Kerr Ladies - Zárraga was in France when he painted this and other gorgeous sports tableaux. It may have emerged from his contact with French women's teams - one of the great stories of the Dick, Kerr's Ladies were their matches against a French team both in England and in France. Seems very likely there is only one or two degrees separation between the painter and the Lancashire lasses.]