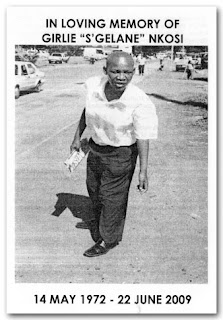 Please read John Turnbull's story about Eudy Simelane. Turnbull digs a little deeper into the crime reported in The Guardian's story about the wave of violent attacks on black lesbians in South Africa (these are often referred to as "corrective rapes"). [You can find LGBT writing on the case here.] Amplifying the sense that there is a link between lesbian visibility and football, Turnbull explains that a second woman from Simelane's local women's team died recently from injuries sustained in a similar attack. Girlie "S'Gelane" Nkosi was a gay and lesbian rights activist. Turnbull quotes from her memorial program: She "[transgressed] all social gender norms and openly confronted the ills posed by economic exclusion" and was "arguably the most visible lesbian of Kwa-Thema."

Their hometown, Turnbull also explains, had been a kind of queer haven for black men and women in the 1980s - and so these attacks have special importance as perhaps symptomatic of a larger reactionary and phobic shift in the culture of the country that was one of the first to allow for same sex marriages.

As I mentioned in my first post about Simelane's murder, reading from the U.S., it is tempting to see this kind of violence against women as a remote problem. Violence against queer men and women is, however, not as uncommon as people like to think. Butch women, lesbians, effeminate boys and men, drag queens and transgendered people do not have the luxury of imagining such violence as a far away problem. One sad example from my own local papers: Lawrence King, a remarkable 14 year old boy who had come out to his class and wore make up and girlie accessories to school, was shot and killed by a classmate in 2008.

Turnbull offers us a much needed perspective on Simelane and Nkosi's lives. There is still a lot more to be said about both of these women - about their lives and about the justice system that appears to be failing their communities. Judges, it seems, can't bear to acknowledge that the lesbianism of these women is relevant - in fact, Turnbull writes:

This past week, Circuit Court Judge Ratha Mokgoatlheng asked whether “lesbian” was an appropriate word to use in court.

This story leaves me with a sickening feeling of outrage, dread and sadness. It is an all-too familiar story - homosexuality so deeply criminalized that the mere mention of it is prohibited.

Imagine the impact that an openly anti-homophobic and queer positive WPS might have, globally. Imagine if the WPS, and other women's pro-leagues, say, held fundraising matches to support the fight against these forms of violence - used the visibility of its athletes to make a statement in support of women around the world?

Actually, why leave this to women?

What if, oh, say, FIFA saw these horrible attacks as crimes against their own athletes - and stepped in - especially as the World Cup will be hosted by South Africa this coming summer. Imagine if the footballing gods - no doubt worshiped by some of the men committing these attacks - publicly and loudly denounced all forms of homophobia? The English FA is trying to wrap its mind around such a thing. What about football's international governing body?

That problem of scale in the comparison made by that sentence is ridiculous. That alone should make you get in touch with someone at, say, The US Soccer Federation: Phone: +1-312/808 1300. If you live outside the US, go to FIFA's associations site and click on your country's name. Contact information for your national FA should appear towards the bottom of the page on the right. Call them, and ask what they plan to do to raise awareness about homophobia in the game, and regarding the attacks on prominent lesbian footballers in South Africa. If they don't have any ideas, offer them a few, and suggest they pose this question to the Committee for Women's Football, the Bureau for the 2010 World Cup, and the Committee for Fair Play and Social Responsibility.

Thank you John Turnbull for once again offering some of the most solid journalism on issues that matter to international women's football.