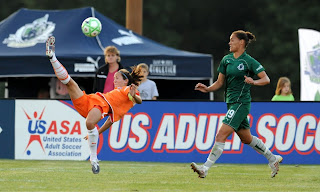 Sky Blue's presence in the final is a bit of a surprise as they just barely qualified for the playoffs. Of course, in a league of seven teams playing a fairly short season I'm not sure the standings mean all that much. They had a rocky season - they fired their coach at the start, and the next to take the job quit just a few weeks ago. They are now managed by US National Team captain Christine Rampone, who also plays defense for the team. In spite of the managerial upheaval, they seem to be hitting their stride just when it counts.

Sky Blue are billed as the NY team but they are from freakin' Jersey. They play in New Brunswick. I'm of course pleased as punch to have a Los Angeles/New Jersey showdown. The team features the dynamic USNT superstar Natasha Kai, former Arsenal ladies standout Anita Asante, Brazilian playmaker Rosana, and the above mentioned Rampone. Kai is one of the U.S. National Team's more interesting personalities - she's aggressive and fast on the field, covered in tattoos, and casually outed herself in an interview with NBC Sports during the 2008 Olympics.

But their win tonight over second-ranked St. Louis Athletica was secured by Keeley Dowling, a defender (pictured above). Her first goal of the season was perhaps the team's most important.

The LA SOL's roster is a real dream team: Marta - three time FIFA world female player of the year; Chinese striker Han Duan; midfielder Aya Miyama, a Japanese NT player with fantastic footskills and who is perhaps the hardest working woman in show business, USNT players Shannon Boxx and Aly Wagner, and the great keeper Karina LeBlanc. Sadly, striker Camille Abily (who scored 8 goals this season and was a real revelation for those who don't follow European women's soccer) will be playing for the French National Team. I just asked her to be my facebook friend. Fingers crossed.

I can't wait for the game. For those of you who've never been to a WPS match, it isn't the screaming-13 year old Jonas brother crowd the press would have you think it is. It's a great combination of sports nuts - girl-jocks, old guys who wax romantic about how women play the game as it should be played (minimal diving, for example), and plenty of dykes & tykes. You really can't beat it. There is a near total lack of cynicism. You sure can't say that about the MLS games these days.

In their three meetings, the best Sky Blue could do was a draw. But Kai & crew are looking pretty fantastic. And Abily has been a key figure in the Sol's campaign this season - she will be sorely missed.

That said, the real story behind the Sol's success may be their defense - they lead the league in shut-outs, LeBlanc is top of the tables in terms of having had the least amount of goals scored against her, and the Sol defenders lead in having the lowest average of "goals against." If there is a defensive team that can shut down Kai, Rosana and Francielli, it's Brittany Bock, Stephanie Cox, and Allison Faulk.