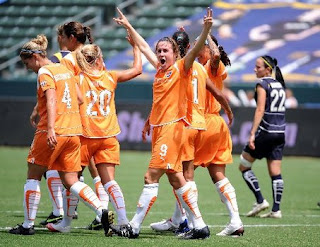 Walking into Carson stadium for the WPS final, I found myself thinking that a win for Sky Blue would be good for the league, and perhaps even good for the Sol. The WPS needs to get rid of the impression that there is one team that is far and away better than the rest. The playoff structure, which guaranteed a place in the finals for the regular season champs, did that by clearing a path to the final for the Sol, as if they deserved a free pass. I don't know a single Sol fan who thought this was good for the team.

The Sol have been a bit complacent - sure, they won the regular season, but they petered out toward the end [and only won one of their last four matches]. Given the talent on the roster, I've often thought they could be even more spectacular to watch - but they need a reason to up their game.

Now they have it (game highlights here).

Sky Blue came into today's game as the league underdogs. They started off poorly and fired their coach Ian Sawyers in only the third week of the season. His assistant Kelley Lindsey took over but resigned on July 30th (see "Sky Blue Coach Quits Abruptly"). Behind this is a messy story - her assistant coach (brought on board by Sawyers) was the subject of some controversy (the details of which are obscure). Lindsey's resignation was a response to how management handled the problem with her assistant. It all sounds like a right mess. Making matters even more dramatic, USNT captain and Sky Blue defender Christie Rampone basically turned up on the field for practice before a match against FC Gold Pride and found herself in charge - Lindsey had quit that afternoon. Someone needed to run practice before this important game - as a very experienced player she was a natural choice. Next thing she knew, she was asked to coach out the season.

Whatever drama was unfolding behind the scenes was upstaged by this afternoon's gutsy performance against the much heralded Sol. (See Goal.com's match report.)

There was no question as to who wanted it more - while the Sol showed sparks of life, players seemed to drift in and out of the game. They seemed surprised by the fight they had on their hands. Shortly after O'Reilly's neatly placed goal in the game's 17th minute, Faulk drew a red card for bringing Natasha Kai to the ground after Kai had beaten three defenders and was making her way into the box. Goal.com questions the call, but from my seat, Kai was certain to take a shot. She was in front of the defenders and gaining speed. And she is Natasha Kai. Even if Faulk clipped her heel, as Goal.com says, she did so because she was trying to run Kai down, but couldn't get in front of her.

This was a rough blow for the Sol, as we were barely through a third of the game when this happened. They still played a strong second half, given this fact (the mid-day August heat couldn't have made being a player down any easier - why oh why are WPS matches at Carson so often played under midday sun???).

Miyama was her usual astonishing self, and Shannon Boxx, too. Marta reminded us of why she is so highly regarded, and so aggressively marked. Her frustration was clear: she spent good stretches of the match being marked by three - even four - defenders. She nevertheless more often than not squeezed a pass through the forest of legs. In one instance, she sent a brilliant cross in front of the goal mouth - but there was no one there to finish for her. Abily, as well as Sky Blue's Anita Asante and Karen Bardsley are representing their countries in the UEFA Euro cup tournament. I'm convinced that Abily was very much the missing link - not only because she's a fantastic finisher, but because when she and Marta (and Miyama and Duan) are on the pitch, even the best defenders are outclassed. Today, the Sol attack seemed nervous and disconnected.

Meanwhile, Rosana, Kai, O'Reilly and Francielli played like they'd been on the same team since they were five. They carried themselves with confidence, and seemed to know not just where their teammates were, but where they would be. All in all, Sky Blue played an aggressive and very smart game. Kudos to Rampone for converting all that Real-Housewives-of-NJ drama into something positive.

Watching them play, I found myself thinking about the fact that most of these players - women from Hawaii, London, Texas, Australia, California and Brazil are living in f'ing Piscataway, in a hotel near their home field at Rutgers University. I was thinking about how shitty it must have been to have all that back-room drama going on in an alien environment - playing for a fledgling league for not so much money and even less security. Kai shacked up with Rampone when she agreed to play for Sky Blue, so she'd have some immediate sense of community. Rampone - a New Jersey native - was apparently the architect behind social outings designed to make her teammates get to know each other as well as their new surroundings.

They are a good story, no matter how you slice it.

Now - I just wish the WPS would get real and stop referring to the Sky Blue as the New York team [at least in the team's url: http://www.womensprosoccer.com/ny]. When they drive that trophy home from the airport, they'll be taking the fabled NJ Turnpike. They'll get off not at the Holland Tunnel, but at exit number 9. At least three of these players know the route well: Yael Averbuch is from Upper Montclair, Heather O'Reilly is from East Brunswick (this is her natural exit in fact), and Rampone is from Point Pleasant (aka - "the shore").

As I picture their ride home - elated and exhausted - sleepy heads leaning against the window as industrial monuments slip past - I hear the paradoxically soft and hard voice of Queen Latifah, taking us all on a New Jersey Drive. The basic message: when it comes this place, the road "out" or "up" is always a rough one - but that ride is the thing that makes you tougher. It's the twists and turns that make you faster, and smarter. That rough ride - past people who don't think you have a chance of going anywhere - is the thing that makes each victory taste all the sweeter.

Sisters, Welcome to the Garden State!