In Praise of Fair Weather Fans (afterthoughts on Galaxy/Barcelona)

Some Galaxy fans think a lot of us Angelinos are not really committed to soccer. While we turn out by the tens of thousands to see Barça, Chelsea, AC Milan and Inter, the fact is, most of us take a pass on making the drive to Carson and few of us really care that much about the whole Beckham/Riot Squad thing.

A number of MLS fans find this annoying. On the morning of the Galaxy/Barcelona match, I spent a good fifteen minutes in a heated discussion about this with one such fan. (We were both getting coffee at the local farmer's market, and he was wearing a souvenir cap from the Galaxy/AC Milan match - I couldn't resist asking him about it.)

He wanted to know where all these people are during MLS games. Some MLS fans call those of us who come out for these exhibition matches suckers (for paying for expensive tickets for off-season friendlies), and question the sincerity of our interest in the sport. The more extreme MLS advocates turn to a nativist logic - arguing that if you are in the U.S., and if you care about soccer, then you should support the U.S. pro league - and your local team - above all others.

This is, for many, the eternal problem - there is something intractably foreign about the game here. Even though it's been played in the U.S. for nearly as long as the game has been played anywhere, its fans, the teams, and the players seem eternally alien - the whole enterprise feels like it comes from somewhere else. The attempt to Americanize the men's game is as fraught as any assimilationist project. 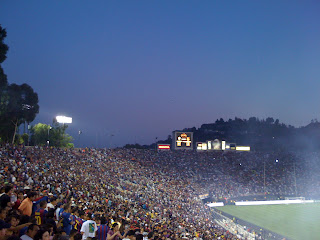 I was one of the nearly 93,000 at the Rose Bowl last night. Barça's blue and red seemed to outnumber the Galaxy's white and black by five to one. This was especially the case among tailgaters - hundreds of camps celebrated the club that is més que un club. Folks brought tents, grills, lawn chairs, tiny pop-up goals - cars were outfitted with Catalan flags, Barça chants boomed from their speakers. I wouldn't say that these were casual fans of either the team or the sport.

This atmosphere had as much to do with the evening's pleasure as did the well-played game. It had me mulling over the morning's conversation about the MLS and its attempt to sell us soccer as a national pastime.

I found myself asking: "What do we want, really, for and from this sport?"

Is making a corporate success of the MLS - and lining the pockets of the dubious executives who run it - the lone measure of the game's success? Is rooting for the Galaxy, and giving our dollars to the creepy monster that is AEG the only way to express one's loyalty? Aren't there other ways to imagine what the passion of fútbol fans looks like?

Perhaps it looks like tens of thousands of people playing the game on nights and weekends in pick-up games, and youth and adult leagues. Maybe it's people congregating in local cantinas to cheer and jeer mythological giants on bootlegged broadcasts. Maybe it's the conversations it lets you strike up with the guy sitting next to you on a bus ride.

Perhaps the game practiced here is migratory and local, massive and low-fi.

Why not imagine that one of the best things about soccer in the U.S. is that it isn't a "national" sport, and that it's most successful here where global capital hasn't quite figured out how to exploit us as either a market or a pool of labor?

Maybe we should work on making the submission of our pleasure to the machinery of corporate greed harder, and not easier.