Why police the border between men's and women's sports? (repost w/ comments about Caster Semenya) 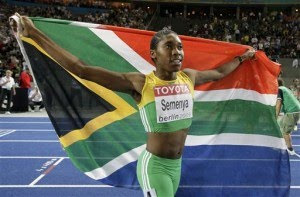 The topic of gender testing in sports has become a headline again. South African sprinter Caster Semenya became a news story when she went to Berlin and claimed the world championship in the 800, crossing the line at 1:55.45, two seconds faster than her nearest rival. She announced herself to the global press only a few weeks earlier at the African junior championships with what had been (until her race in Berlin) the fastest time in the world this year (1:56.72).

A number of athletes and commentators have cried "foul" and demanded that Semenya prove her sex for the IAAF. Rising above the phobic and cruel rhetoric of the press, her competitors and the track authorities, her family and supporters speak frankly of her boyish body and express anger at the way questions about Semenya's gender have been handled. In this interview posted on The Guardian's website, her father quite proudly defies the narrow minded to assert that his daughter looks "just like me" and "is a woman." She grew up playing football with the boys, being teased for being a "tomboy," etc. And, her family and friends chime in together, she is a woman. She is, quite clearly, a gender warrior. I've re-posted my previous article as a sign of support for her and other athletes like her.

The case of Caster Semenya raises the question of what it is we are looking for when we segregate men's and women's sports.

In 2004, Mexican National Women's Team superstriker Maríbel Dominguez was signed to a two-year contract with Celaya FC, a second division men's team. FIFA stepped in with an official prohibition and the assertion "There must be a clear separation between men's and women's football." The memo furthermore forbid her from playing in exhibition games with the men's squad. (See Jo Tuckman's 2005 Guardian story.)

My question today is why "must" the separation between men's and women's football be "clear"?

Dominguez played for years with boys - successfully disguising her gender and enjoying a level of play not available to girls of her generation. Nicknamed "Marigol," in 2004 she was a highly ranked international player who went on to play for the Atlanta Beat, FC Indiana, FC Barcelona, and the Girona team EU L'Estartit.

Nearly every feature story on Marta makes a big deal out of how she grew up playing with boys as if this were unusual. (See Michael Sokolove's 2009 NYT profile, for example). Of course it's fun to read about Marta's childhood years fighting macho attitudes on dusty pitches and in the street - but just once I would like to see it acknowledged that her experience is not extraordinary. It is in fact absolutely typical for female players - especially (but not only) those living in places where women's sports is not accepted. In the U.S., girls play with boys, by the way, and many also find themselves combating patriarchal attitudes about sports when they lace up their boots. Brazil hardly has a monopoly on machismo.

Playing with boys as you grow up is totally ordinary, in other words. Where girls don't have to sneak into boys games, they start off playing organized youth soccer together. There is much debate about at what age girls and boys should separate. As girls mature earlier it can be to their advantage to play with boys through much of adolescence - in Germany, they play together until they are 17 (I am not sure if this is true for the highest level of U-17 teams - I suspect the rule is that girls are only forced off boys teams at 17). Clearly this hasn't hindered the development of the men's or the women's game. Germany's NWT holds the World Cup, and are consistently ranked in the top three.

All of this is to say that Marta is unique not because she played with boys, but because she was one of the very best players on every boys team on which she played.

To return to FIFA's intervention against Celaya's inclusion of Dominguez on their roster: If a female player can handle herself in a men's professional league, why shouldn't she be allowed to play? What would be the harm?

I don't buy that FIFA is interested in protecting the development of the women's game in Mexico - not that I would endorse such an explanation (in which an organization dominated by old, white patriarchs is working to "protect" women against their own desires).

If Maribel Dominguez had played for Celaya FC, and held her own (never mind excelled) she would have profoundly unsettled notions about the difference between men and women.

The South African National Team player Noko Matlou had her gender questioned by Ghana's National Team in 2007, who sent a match official into the dressing room to establish that she wasn't a man. Matlou was named Africa's female player of the year in February 2009.

The 2008 Africa Women's Cup was marred by a lot of things (bad referring, overt attempts to undermine press coverage of the games, last minute changes in scheduling of training sessions for visiting teams, etc). It was also packed with major upsets (see FIFA report here). Floating around the blogosphere has been a very interesting story: Two teams (Cameroon and Nigeria) filed complains with the Confederation of African Football accusing the eventual champions (and host team) Equatorial Guinea of fielding two men.

What little information I've found on this is not very helpful - limited by homophobia or ignorance. To this day, a lot of Nigerian players are insistent that they were MEN (one article reports that a Nigerian forward in essence felt a player up on the field). That doesn't necessarily explain the 1-0 loss, though. They'd played the same line-up previously and won and didn't file a complaint then. Their credibility is undermined by this fact.

While the Nigerian players say the two defenders were men, over time the language of the story as it has been reported in African newsletters has shifted to suggest the players are intersex - meaning, born with sexual characteristics that do not conform to traditional definitions of male/female gender.

Sadly, if the players are indeed intersex, they would be banned from the game for having for a physiology that challenges the notion that gender difference is immutable. And, as it happens, one of Nigeria's own players was recently "outed" as intersexed, and banned from the game. She was the second in the national squad's history to be so exiled - talk is that she may undergo surgery in order to become eligible to play women's football again. But should her body be medically altered so she can play football? Does women's football really need her to do so? Medical management of intersexuality is a frightening story of institutions deciding to force a body to conform to its ideas about sex/gender at great cost to the person on whose interests doctors pretend to be acting. Such surgeries are about managing the anxiety of parents and doctors - not about enhancing the life and happiness of the intersexed person.

In response to the scandal caused by the complaints about Equitorial Guinea, the Confederation of African Football will institute a "gender test" - naming a body that menstruates female. This test is notoriously unreliable, as is any other test grounded on a single factor (see "The Gender Trap"). The institution of this test in African Women's Football is a step in the wrong direction.

The policing of these borders creates problems for especially female athletes. The Journal of the American Medical Association explains:

Gender verification has long been criticized by geneticistist, endocrinologists and others in the medical community. One major problem [is] unfairly excluding women who had a birth defect involving gonads and external genitalia (i.e., male psuedohermaphrodism)...A second problem is that only women, not men, [are] stigmatized by gender verification testing. Systematic follow-up [is] rarely available for female athletes "failing" the test, which often [is] performed under very public circumstances. Follow-up [is] crucial because the problem is not male impostors, but rather confusion caused by misunderstanding of male pseudohermaphroditism. (Simpson et al., "Gender Verification in the Olympics", JAMA vol.284, pp. 1568-1569, 2000 - cited in Wikipedia's Gender Verification in Sports)

These cases ask us to consider what it is that we actually want from the gender division in sports. What is it we are looking for in a women's game? Surely not a confirmation of the "femininity" of the people on the pitch. It must be something else - like how the women's game allows us to escape from narrow ideas about who and what women are. Why shouldn't women's football be exactly the game to welcome gender-bending warriors like the intersex athlete, and the transgender warrior? And why should the women's game be the only one to do so? Let's make the borders more porous. Better yet, let's imagine that it is possible to play across them - because the truth of the matter is, people do, every day, and it's not that big a deal.