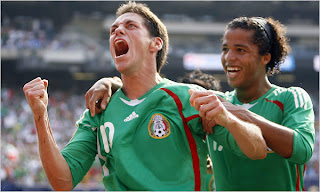 [Gustavo Arellano had me on his show to talk about Wednesday's showdown between Mexico and the US - listen here.]

The stakes are high, particularly for Mexico. At home, El Tri are unbeaten against the US. In the past decade, however, they've had a losing record in matches played away from home. Mexico's scandalous 5-0 thrashing of the USMNT the other week was therefore hugely important. Not incidental to this victory is the fact that it was played just outside of New York City, before nearly 80,000 cheering fans - Giant Stadium's largest crowd for a soccer match. Mexican fans dominated the stands, and this clearly inspired the team. (Check out this highlight clip.)

I was at my league matches that afternoon, and could hear cheering erupting from apartments in the neighborhood - over and over and over again. It seemed that the pleasure of beating the US was not diminished by the number of goals. No goal differential would have been large enough - there is a lot of pent-up frustration between the two sides (Mexico hadn't won an away game against the US since 1999, and until the tide turned in the 1990s, the US went nearly forty years without winning a single game against their neighbors, and has yet to win in Mexico).

On Wednesday, the US will be fielding an entirely different line up - namely, the one that beat Spain last month. Nevertheless, Mexico pretty much beats everybody at Azteca. And in World Cup qualifying matches played there, Mexico has only lost once, to Costa Rica. Costa Rica is in the top spot in the World Cup qualifying region. After them, it's the US, then it's Honduras, and after that right now, it's Mexico. They really need to win this one, in other words.

The idea of Mexico not qualifying for the World Cup is too much for me to bear. Let's remember their stunning performance against Argentina in the last World Cup (good highlights here) - arguably one of the best matches of the tournament. They took the game to the second period of extra-time and lost in only the last few minutes, when Maxí Rodriguez chested a perfect cross and volleyed it into the net. The drama of that game was excruciating, and it showed us what Mexico are capable of as a team. They are one of those squads that should be a lot better than they are - and their fecklessness is making their fans (and the Mexican press) insane. 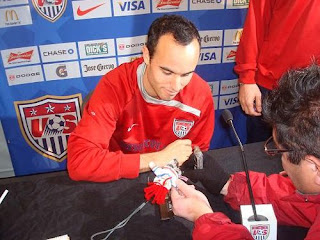 And then we have the phenomenon of Donovan-hate. His goal knocked Mexico out of the World Cup in 2002. The US's leading goal scorer pissed on the field at Estadio Jalisco during a training session before a U23 game against Mexico in 2004. (The official story is that the bathrooms were locked.) This incident was recorded by a television crew and broadcast - leading to the casting of Donovan as the most hated man in Mexico, where he's had bags urine thrown at him on the field. (The US team lost that match, by the way, and thereby failed to qualify for that summer's Olympics.) More recently, Récord (the Mexican sports newspaper) gave out coupons to readers that they could redeem at Radio Shack - not for batteries (which have also been thrown at US players), but voodoo dolls (Donovan is being shown one here). All of this of course makes the whole thing between Beckham and the Riot Squad look pathetic.

(Donovan, by the way, grew up in Redlands, CA and speaks Spanish well enough to give interviews in the language of his rivals. Somehow I suspect this makes him even more irritating for Mexicans.)

Add to all of this the complexity of national identity in the US when it comes to this sport. Be it club or country, teams from Mexico draw huge numbers of fans to games played in the states.

Where the global game is concerned, it is not a given that the US national team enjoys support at home. World Cup qualifying matches played in the US are scheduled in locations that minimize the presence of Latino supports of other teams - later this fall the US plays El Salvador not in Los Angeles (you could fill the Rose Bowl with supporters of both teams) but in Utah (there will still be tons of Salvadorean fans at that game). February's game against Mexico was played in Ohio. The US played Trinidad and Tobago in Tenessee, and Honduras in Chicago.

Over 79,000 people turned out to watch July's Gold Cup final, and by all reports the stadium offered thunderous support for the Mexican side. As Andrew Das wrote for The New York Times soccer blog,

Do not expect Giants Stadium to host any important World Cup qualifiers in your lifetime.

Against Honduras in 2001, there were 55,000 people in RFK Stadium (in Washington DC). My guess is 40,000 were Hondurans. We lost. Selling tickets and making money is fine, but our priority is for South Africa. And to have the best chance, we need to play in places that make it harder for our opponents. One time we played Mexico in Columbus, and the temperature was below freezing. Now, that was a big advantage.

However you slice it, this stuff makes a great story - and if there is any place in the world where you can feel the tension in the overstretched fabric of American nationalism, it's in the complexity and intensity of this rivalry.

So, that's the sort of thing Gustavo and I will be talking about. Can't wait!

[In the interview, I mentioned the semifinal match between Turkey and Germany in Euro 2008 as an interesting point of comparison - see this New York Times article for an introduction to the topic. Even if you speak don't German, Turkish, or the Turkish-German version of Spanglish, it's worth watching Tiger Berlin's SUPER-EM-STÜDIO series of reports on the tournament in which he often acts out highlights of the match - this episode previews the Turkey - Germany match, and this one drops you right in the aftermath - note his awesome bi-national jersey, and how in this wrap up episode, puts on the USA sweatshirt which seems to be his uniform of choice. ]