Afterthoughts on Mexico vs US 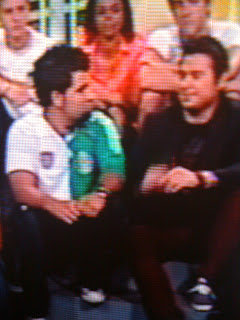 The photo above was taken during Mun2's pre-game show. This NBC Universal channel (which also broadcasts some WPS matches) is sortof a shadow-station (they never seem to be identified in the digital TV's guide). They advertise themselves as "uniquely American" and, like several channels in the Los Angeles area, Mun2 broadcasts bilingually (commercials may be in either language, commentators for music video and sports programs will move between Spanish and English). In this case, however, Mun2 broadcast the match in English, using a visual feed from Telemundo. Going into the match, the guys pictured above said "It's time to choose!" - meaning, among our audience, it's not a given you'll be supporting one team or the other. Kindof fabulous. The commentary was really lame, though - typical American sports chatter in which they talk endlessly about nothing, especially when the US doesn't have the ball (which was most of the time). We started to wonder if they knew the names of Mexico's players.

So we switched to Telemundo, and lo and behold - you could hear the stadium. The announcers had to shout over the crowd's roar, the volume of which had most certainly been turned down for the English language broadcast. And you could hear 100,000 people shout "Puto" every time Howard took a goal kick.

It was a great game, and there is much to say (like: where was Donovan?). But I am most fascinated by the boy-drama of the second half: the Mexican players were totally out of line in trying to force Davies to his feet - three gathered around his prone body, and seemed to yank him up by his neck. (Davies had been hurt on a free kick and was subbed out shortly afterward.) There was nearly a full-on brawl between the two teams. (No cards issued.) Davies scored the US's only goal - quite dramatically threading himself past one defender, then another, then another.... He made genuine trouble for Mexico's back line through most of match. I was really sad to see him leave the pitch, and the fact this drama was centered on him didn't seem accidental.

Shortly afterward the weirdness around Davies, Castello tried to yank the ball (clearly a goal kick and not a corner) away from stalwart defender "Gooch" (Oguchi Onyewu). Those two moments reminded me a lot of our adult league. Every now and again, certain teams love to generate this sort of drama. And they often seem to win. It's as if they stir up the other team's emotions (and distract them), and then focus their own passion on scoring. Sure enough, Mexico scored right after all this. It's a form of psycho-emotional warfare, and it works more often than you'd think it would.

ESPN, by the way, did a pre-game show - the first they've ever done for a game they weren't broadcasting themselves. So much for "Americans don't care about soccer."

I close with this random question - should Brian Ching - born in Hawaii - be playing for the USNT, given this?